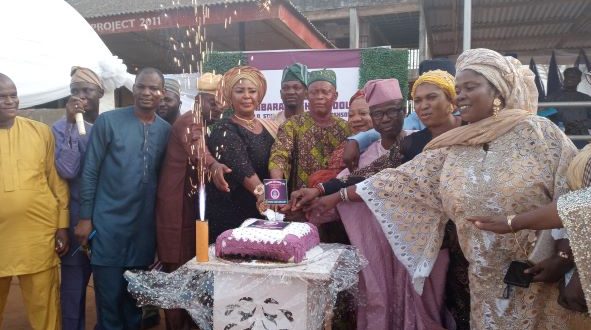 The Lagos State Commissioner for Education, Mrs. Folashade Adefisyo, has called on stakeholders, NGOs and well-meaning individuals to collectively address the challenges in the education sector, stressing that all issues in the sector cannot be solved by the government alone.

The Commissioner made the call during the celebration of the 41st anniversary/reunion party organised by the Old Students’ Association of Odo-Obara High School, Epe, held within the school’s premises.

Mrs. Adefisayo, who was represented by the Deputy Director, Schools’ Support Unit, Education District III, Mrs. Abiodun Adefuye, appreciated the Alumni for being a source of pride and community development in Epe and the State in general.

She, therefore, enjoined everyone to continue to commit more time and resources to the development of the school as well as the education sector in the State.

The President of the Association Alhaji Ismail Abdulrasak, stated that the objectives of the group include the development of programmes that will enable the alumni to create a better structure towards the growth of its alma mater and the students through a mentorship programme.

Alhaji Abdulrasak appreciated the organising committee, the Executives, Board of Trustees and members of each set who have contributed immensely towards the development of the school and to the success of the event.

Mrs. Adebimpe Beckley, the Human Resource Officer, Eredo LCDA and also a member of the Association, delivered a paper titled: “Discover Yourself” where she defined self-discovery as the process of acquiring insight into one’s own character, adding that it is never too late to discover one’s self.

She said: “Self Discovery can occur at any point in ones’ life. For some, it comes earlier while for others it might take a while. However, it’s a natural process and I want every one of you to keep striving to explore your potential as we might still have hidden talents yet to be discovered”.

The highlight of the event was the presentation of awards and certificates, cutting of the anniversary cake and drama performance by some of the present students of the school.

LASG URGES ADMINISTRATORS TO STEP UP SAFETY IN SCHOOLS