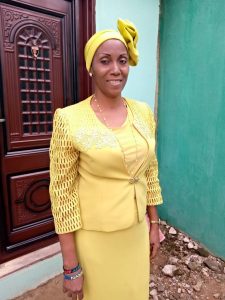 Mrs. Taiwo Adetoun HAASTRUP (Nee Ogunleye) was born in Ibadan on 13th May, 1964, and an indigene of Ekiti State. Her academic journey started at Ebenezer Primary School, Oke Ado Ibadan, Oyo State. She later proceeded to St. Louis Grammar School, Ikere Ekiti between 1975-1980. She thereafter attended Oyo State College of Education, Ilesha where she obtained the National Certificate of Education (NCE) in French Education between 1980-1983.

She had her National Youth Service Corp in Ikere Ekiti, Ekiti State from 1983-1984 and as a graduate, she got a teaching appointment with Lagos State as a French language teacher on Master Grade 11 level and was posted to King Ado High School, Lagos Island where she worked between 1989-1993.

She was later transferred to Lagos Anglican Girls Grammar School between 1993-2001, where she rose to Principal Grade III level. In the course of working there, she served as the Secretary to three (3) different Principals consecutively. On the returned of public schools to the missionaries by the Lagos State Government, she was moved to Eric Moore High School, Surulere (2001-2003). Furthermore, at the administrative partitioning of secondary schools in Lagos State, she was again moved to Eric Moore Junior High School, Surulere as Chief Education Officer GL. 14 (2003-2006).

Thereafter, she was later deployed to Inspectorate Department Ikorodu, Zone 1, as Chief Education Officer GL 14 between 2006-2009 and later got her promotion as Assistant Director. Her diligence and determination earned her a merit award as the best Senior Staff in District II for the year 2007.