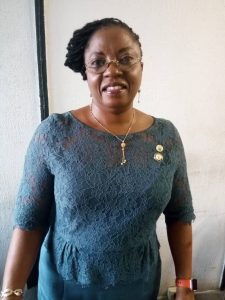 She had her Secondary Education at Prospect High School, Abanla in Ibadan and College of Education, Ikere Ekiti, Ekiti State. Thereafter, she proceeded to Ogun State University (OSU) for B.Sc in Guidance & Counseling and University of Lagos (UNILAG) for M.Sc in Educational Administration.

She joined service in 1985 and worked at Ondo Boys High School from 1985 to 1993. She thereafter joined to Lagos State Civil Service through inter-state transfer in 1993 and worked at Omole Grammar School and Community High School Wasimi, Maryland respectively. She was redeployed to Education District VI, Co –curricular, Science & Technology Department in 2003. She was a member of School premises and Officer in charge of Spelling Bee and Road Traffic Safety Advocacy where she received letters of commendation in 2009.

She was redeployed into the mainstream Ministry of Education and posted to the Co – curricular Services Division in 2011. She represents the Ministry in various inter-ministerial committees such as Ministry of Youth and Social Development, Ministry of Women Affairs and Poverty Alleviation and Ministry of Justice She also serves in the UNICEF and British Council initiative on Safe Guarding Policy on Domestic Violence.

She has been a member of the Nigerian Red Cross Society since 2009. She is also a member of the Counseling Association of Nigeria (Lagos Chapter). She went for pilgrimage to Jerusalem in 2005. Her hobbies are travelling, reading, dancing and cooking.

She is currently the Director, Co –curricular Services Division, Ministry of Education. She is married with children.